Coverage Q&A’s: A Look at 4 Insurance Claims in “Home Alone” 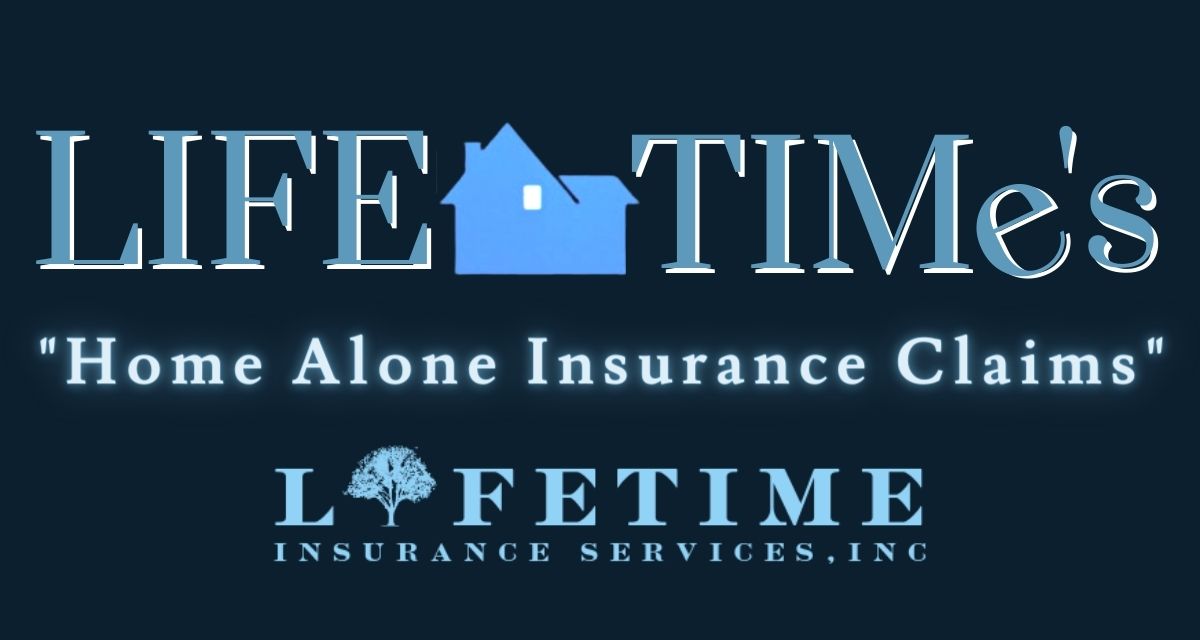 “Home Alone” is easily one of our favorite Christmas movies – but how much money in insurance claims did Kevin’s shenanigans cost the McAlister family? Our insurance team at Lifetime thought it might be fun to take a real-life assessment of the various damages incurred throughout the movie, and give you our best insight into what the McAlisters’ insurance would cover. So, with that in mind, here is a list of insurance claims from “Home Alone”, with a breakdown of what insurance likely would and would not cover!

First of all, if you havent seen “Home Alone”, definitely make the time to watch it with your loved ones asap! But, for those poor, deprived few who have not seen it, here’s a brief synopsis.

Amid the hubbub of the packed-full McAlister family home, everyone is preparing to set off for a Christmas holiday abroad in Paris. Kevin, the youngest of the McAlister clan, feeling invisible to his family, throws a tantrum that night, expressing his wish to wake up the next day and never see his family again. The following morning, the chaos continues as Kevin’s parents wake up late, leading to a mad dash to the airport with 12+ relatives in tow! Poor Kevin falls through the cracks, and he wakes up to an empty house with his entire family having left to Paris without him.

While Kevin has fun being home alone at first, he soon faces off with two less-than-apt burglars, Harry and Marv (the self-proclamed “Wet Bandits”). So, with their sights set on Kevin’s house to rob, he must think outside the box and outsmart them to defend his home. Setting all sorts of elaborate boobie traps, Kevin is able to outwit the burglars and protect his home, leaving quite the tornado of property damage and personal injuries (to the criminals) in his wake. His immediate family, having realized they forgot Kevin, made it back home right in time for him to clean up the mess from his harrowing battle with the burglars, and all are reunited with a newly found appreciation for one another.

A Closer Look at the Potential Insurance Claims

Now that you’re up to speed on the “Home Alone” plot, let’s dive into the various incidents and talk about potential claims that will and will not be covered under the McAlisters’ insurance!

It’s the night before Kevin and his very large, boisterous family is set to leave for Paris. With a full house of hungry McAlisters, the delivery guy from Little Nero’s Pizza pulls up in the knick of time with a very large order. However, the disaster-prone delivery guy collides with a pretty substantul metal statue in the McAlisters’ driveway, knocking it over. While he was able to just slip out of his car and gently place the statue upright like nothing happened, we can’t help but wonder: What if this happened in real life? Would insurance cover any damages on the behalf of the pizza guy and the McAlisters? Well, one of our agents weighed in with the following assessment:

Agent’s Assessment: Yes! Little Nero’s Pizza would need to have a commercial auto policy for the company vehicles. Since the pizza driver is responsible for the damage done to the McAlisters’ home, Little Nero’s insurance would pay liability property damage to the McAlisters. If they wanted to repair the company vehicle, Little Nero’s would need to carry collision coverage and pay for the deductible as well. Good luck to that pizza driver — he might be out of a job!

The Solution: Make sure you have a conversation with a commercial agent about what limits of liability your company needs. If you do not have sufficient coverage, then your business can be held liable for the damage. If you are planning on maintaining your vehicles, consider having comprehensive and collision on your policy.

Having drawn up his battle plan to defend his home against the “Wet Bandits”, Harry and Marv, Kevin lies in wait for the dim-witted burglars to walk into the first wave of traps he has set. Harry, the self-appointed “brains” of the heist operation, takes the front entrance, while Marv takes the basement-level entry. All seems quiet and normal at the McAlister home as Harry approaches the front stoop – however, chaos soon ensues. Harry unwittingly walks (or falls) right into Kevin’s trap, slipping and sliding finally falling down the front steps and landing on his back in the snow.  Kevin’s  scheme of pouring water over his front stoop and steps in the icy-cold Chicago weather proved to be a simple yet highly effective tactic. Even though Harry is attempting to illegally enter the McAlister home, it does beg the question: Would the McAlisters be held liable as the homeowners for medical costs incurred by the slip-and-fall victim, since it happened on their property? Here’s what one of our insurance pros had to say:

Agent’s Assessment: Yes, the McAlister’s could be held liable for any medical expenses Harry incurred. The McAlisters’ homeowners policy should have coverage for medical payments. Usually, it is a small amount that can be thought of as “please don’t sue me, money”. If Harry’s medical expenses were substantial enough that he decided to take the McAlisters to court, the McAlisters’ liability on the homeowners policy would kick in. Liability is one of the most important coverages, and setting the correct amount is critical. Make sure you are working with an agent who understands the difference in protected and unprotected assets. If Harry’s medical and court expenses exceeded the amount of coverage on the McAlisters’ homeowner policy, the McAlisters would personally be liable for the rest, which means their unprotected assets could be liquidated. Either way, it’s probably a good idea to always keep your walkways on and around your property safe for visitors!

The Solution: When working with your insurance agent, it is important to be transparent with them about the different types of assets you need protected, so they can set the correct amount of liability on your homeowners policy. In the case of “Home Alone”, an umbrella policy could also be an affordable solution for the McAlisters, depending on their assets and how much protection they need. (Which we are guessing might be quite substantial, judging by that magnificent house! But seriously – what did Kevin’s dad do for a living?!)

So, now Harry and Marv have been put through the ringer just to enter the McAlister home, from open flames and a BB-Gun guarded dog door to a falling iron straight to the face. Although Kevin certainly pulled out all the stops to make it as difficult as possible for Harry and Marv to get inside his home, there’s just one detail that has us stumped: Kevin did not lock the front door! There was a method to Kevin’s madness – the unlocked door gave Harry a false sense of triumph, causing his over-confidence to bring him right into Kevin’s boobie-trap. What Harry discovered upon turning the door knob was that it had been heated to a scorching temperature from the inside. While this stroke of genius definitely causes Harry a world of pain as he hilariously throws his burning hand into a snow bank for some relief, we are left wondering: If this happened in real life, and the McAlisters tried to file a burglary or theft claim, would it be covered, since there technically was no “forced entry”? Our insurance agent answered us with the following:

Agent’s Assessment:Typically, if there is no evidence of forced entry, it is harder to prove that a burglary actually occurred. If the claims adjuster determines there was no forced entry, there are grounds for the stolen items to not be covered by the McAlisters’ homeowner policy. However, in most forced entry burglaries, the items are typically covered under the personal property on the homeowners policy and are subject to the “All Perils” Deductible.

At the beginning of the movie, we get to spend some time with the two burglars, Harry and Marv, as they rob the McAlisters’ neighbor. Before they leave the house with their loot, Marv makes it a point to stuff the kitchen sink drain with towels and turn the faucet on high to flood the place. He explains to Harry that all the greatest burglars have a calling card, and this should be theirs, naming themselves “The Wet Bandits”. At the end of the movie, Kevin flees his house to that same neighbor’s home, walking into a flooded basement. While we never meet the McAlisters’ out-of-town neighbors, we can’t help but feel for them and the insurance claims they’ll be dealing with upon their return! So, we were wondering: Since the burglars intentionally flooded the neighbors’ basement, would their insurance still cover it as an “act of vandalism”? Here’s what one of our agents had to say:

Agent’s Assessment: Insurance companies will never cover any intentional damage done by the homeowners themselves. However, if the McAlisters’ neighbor is able to show that their home was vandalized by Harry and Marv, the insurance company would help with the cost of the repairs. Better yet, if the McAlisters’ neighbor had a home security camera, it would be easy to prove the vandalism.

The Solution: Make sure your homeowners policy has sufficient water coverage. In the state of Texas, there are four main water coverages you should look for on your policy. Sudden and accidental, water backup and sump pump, seepage and leakage, and foundation water coverage. During the winter storm, we saw many pipes freeze and cause accidental flooding in people’s homes. While the insurance will never cover the cost of the pipes themselves, having sudden and accidental assisted homeowners insurance will cover the cost of repairs to flooring, walls, furniture, and water restoration. Also, if you are in an area known for flooding, be sure and ask your agent about flood insurance.

Is Your Business Covered Against Theft?

If not, our commercial insurance specialist, Will Wilcoxson, can help!

At Lifetime Insurance  Services, we firmly believe in that old adage, “variety is the spice of life”.
With access to multiple providers, we can offer a pool of coverage options as diverse as your needs.

Whether it’s your home and vehicles or your commercial property and business, our insurance experts will fight as doggedly as Kevin did to build coverage that will protect what matters most to you. If you feel like you may have some holes in your coverage or simply cannot remember the last time you shopped your insurance policies (helpful hint: we recommend shopping annually!), then now is a great time to let our team help you! Give us a call at (972) 771-2622 or visit our website to set up an appointment with one of our agents.

Coverage for the “What-Ifs”

Our experts take the time to learn all about you and your lifestyle, so we can find coverage that will protect what matters most to you.