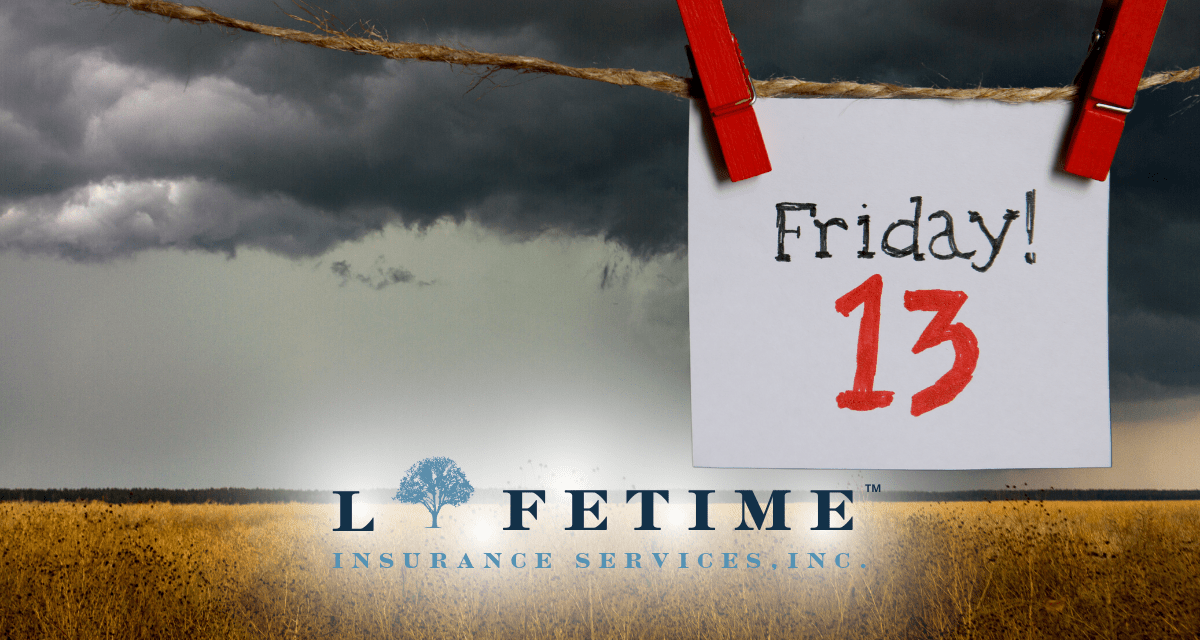 The Truth about Friday the 13th & Insurance Claims

Paraskevidekatriaphobia – from the Greek translation of ‘Friday’ (Paraskevi), ‘thirteen’ (dekatreis), and ‘fear’, (phobos) – this is a real phobia of Friday the 13th that plagues people all over the world! Although it’s unclear how or when Friday the 13th became such a widely known day of bad luck, we are curious about how valid this phobia really is. As experts in helping people cover the strange and unexpected events in life, it seemed only natural to examine this superstition through the lens of insurance claims. So, our insurance team at Lifetime has examined the stats; and let us tell you, what we have found will likely shock you as much as it shocked us!

Is the Superstition Valid?

A Look at the Stats: Friday the 13th Insurance Claims

So, can we help validate the widespread superstitions surrounding Friday the 13th? Not only can we assure you that the stats don’t support the superstition, but actually point to quite the opposite! According to a recent study conducted by statisticians at the Dutch Centre for Insurance Statistics, Friday the 13th is – believe it or not – safer than an average Friday. I know, we were shocked, too!

What does the study say? Well, for starters, this study revealed that fewer accidents and reports of theft and fires occur on Fridays that fall on the 13th. That being said, the average loss value of fire and theft incidents occurring on Friday the 13th tend to be slightly higher. If that didn’t blow your mind, here’s another surprising revelation from the study: statistically speaking, there are fewer traffic accidents on Fridays that fall on the 13th!

And if that isn’t enough to turn your superstition on its head, even the friendly skies are statistically safer on Friday the 13th! According to the Aviation Safety Network database, which holds all known airliner accident fatalities, the numbers support an entirely different narrative than the one we’ve come to know concerning Friday the 13th.

Although there is no definitive reason as to why insurance claims are fewer on Friday the 13th, it does make us wonder if people just tend to be a bit more wary of life’s ‘what-ifs’ and make a more concerted effort to err on the side of caution.

But what if you do find yourself in an unlucky situation on Friday the 13th (or any day)? Well, facing an accident, theft, or property damage/loss usually brings up a lot of questions that can be particularly pressing in an emergency situation. So, we took some of our most frequently asked questions to our insurance experts. Here’s what they had to say:

Q: If my property sustains damage, what should I do? Can I make emergency repairs to protect my property from further damage?

A: First, it would be a good idea to contact your agent. Your agent is knowledgeable on how the coverages on your homeowners policy works. By talking it over with your agent, they can help you come up with a plan on which steps to take next. If there is coverage for the damage, it never hurts to get an estimate so you can make an informed decision about filing a claim. If it is something like a pipe burst and there is running water, by all means, turn your water off to prevent further damage! But if it is non-threatening, it is best to wait until a claim is filed and the adjuster can assess the damage. Be sure to save receipts and take pictures for the adjuster.

Q: I don’t think my losses exceed my deductible – should I still file a claim?

A: Consider getting an estimate to help determine the cost of the damage. Insurance companies will never send an adjuster out without filing a claim. However, if you are concerned about not meeting the deductible, getting an estimate can be useful without having to put a mark on your claims history. Unfortunately, if the damage is less than the deductible, it is not covered by insurance and not worth hurting your claims history by filing.

Q: If I’m in a car accident, what information do I need to collect from the other driver?

A: If you are in a car accident, it is always a good idea to try to file a police report. That way the accident can be documented. Be sure and ask the driver for their name, number, and insurance policy number and company. If you can take a photo of the auto ID card, that might be the quickest way to gather the information. Be prepared to share your auto insurance information and contact info as well.

Q: What if the other driver involved in the accident doesn’t have insurance? What are my options?

A: Over 20% of Texas drivers are uninsured or driving with expired insurance. If you are hit by someone who does not have insurance, does not have adequate insurance, or flees the scene, check with your agent to see if your policy has Uninsured/Underinsured (UM/UIM) coverage. In the state of Texas, UM/UIM coverage has a $250 deductible that you would be responsible for, even if you did not cause the accident. But at least there would be coverage for medical costs you or your passengers might have incurred, and there is coverage to help repair your vehicle.

Q: What if someone breaks into my car and steals personal property from me? Will my auto insurance policy cover the loss?

A: Any personal property you have in your vehicle is covered under your homeowners or renters policy – not the auto. If you are concerned about high valued items being stolen out of your car, ask your agent about a personal articles policy. Personal articles policies provide coverage world wide and usually have no or a low deductible, unlike your typical homeowners policy. Now, if your vehicle sustained damage from the break in, to get it fixed you would need to file a claim on your auto for comprehensive coverage.

Is Your Business Covered?

If not, our commercial insurance specialist, Will Wilcoxson, can help!

At Lifetime Insurance  Services, we firmly believe in that old adage, “variety is the spice of life”.
With access to multiple providers, we can offer a pool of coverage options as diverse as your needs.

Whether it’s your home and vehicles or your commercial property and business, our insurance experts can help you build the coverage you need to protect what matters most. If you feel like you may have some holes in your coverage or simply cannot remember the last time you shopped your insurance policies (helpful hint: we recommend shopping annually!), then now is a great time to let our team help you! Give us a call at (972) 771-2622 or visit our website to set up an appointment with one of our agents.

Shop Your Coverage with Lifetime

Our experts take the time to learn all about you and your lifestyle, so we can find coverage that will protect what matters most to you.